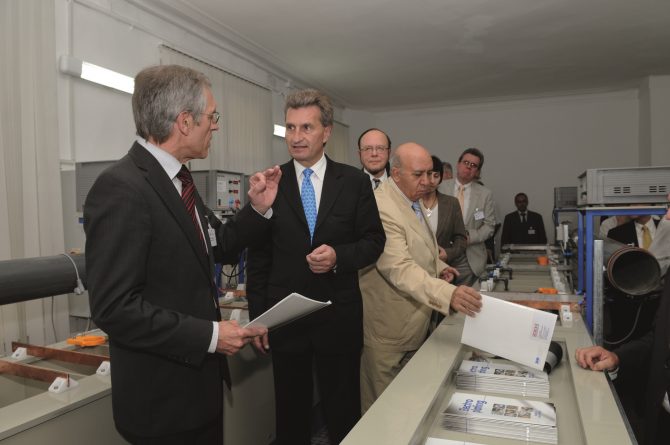 ZEH Metallveredelungs GmbH is a specialist for the electroplating of different types of metal parts which are used in various industries. Horst Dettinger, CEO of ZEH, first got an idea about the local unsatisfactory circumstances in the field of electroplating during several trips to less developed countries. Thus, the company decided to offer its know-how internationally.

ZEH launched a public private partnership project in Azerbaijan in November 2008, following a previous PPP-project in Iran. Various steps of the ambitious project are currently being realized in cooperation with the German Federal Ministry for Economic Cooperation and Development (BMZ), sequa, the College of Aalen and WiN=WiN. Local partners are the Ministry of Industry, the Azerbaijan Technical University (AzTU) and the International Ecoenergy Academy (IEA).

The PPP- project includes the establishment of a modern training centre at the IEA with electroplating training facilities and a test laboratory, the implementation of an E-learning-system and a master’s degree in “surface engineering”including in-plant training programs and the foundation of an Azerbaijan Association for Occupational Safety and Environmental Protection.

The PPP- project received strong political support through the visit of a business delegation from Baden-Württemberg headed by former Prime Minister Günther Oettinger during the dedication of the new training centre in August 2009.