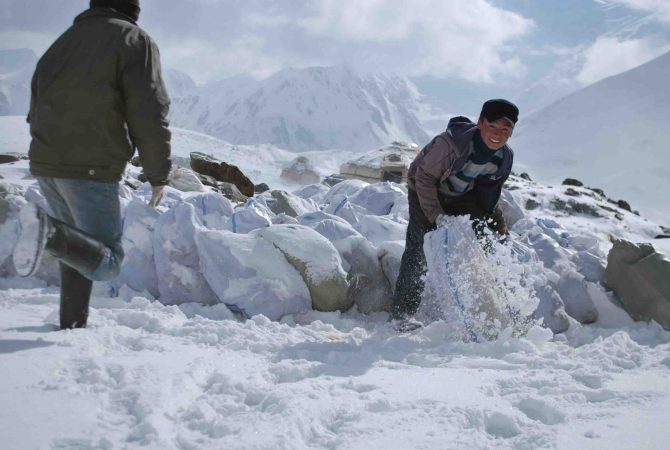 Part of Kyrgyzstan Mountain Project (2007-2009) to promote mountaineering on Pik Lenin were several weeks of environmental action in the summer of 2009.

Via an appeal for assistance published on the Mountain Sports Homepage www.mountain.ru, an experienced mountaineer group from Omsk / Russia has consented to help with the disposal of waste in the altitudes of Pik Lenin. This help was offered voluntarily.

The leader Igor Zdanovich summarizes the expedition as follows:
“In Camp 1 (4,200 m) we have first made an analysis of the situation. We started with sorting the waste: cans, plastic bottles, glass, cardboard and cloth. There was a lot of work; part of the waste was frozen into the ice. At the end, we had 150 bags filled with garbage here.
To camp 2 (5300 m) we have made a total of three trips. 20 garbage bags we brought to the Heliport located at Camp 1. Further up the mountain, at an altitude of 6,100 m,, the waste does not remain long due to very strong winds. Everything that we have managed to find, we have disposed of.”
(…) “We have identified the following problems: There are dumps that are part of the base camps, but base camp leaders denied this. The evidence were old torn cardboard boxes and paper bags with an inscription of the names of certain base camps.”
(…) “In my opinion, it is worth introducing a proper monitoring. Without saying who we are, we have spoken with the heads of several camps in a commanding tone. It has worked very well. Such measures are worthwhile especially for Kyrgyz relations. Overall, we have been able to motivate some volunteers and our example has sensitized many employees working at the mountain to properly clean up garbage.”