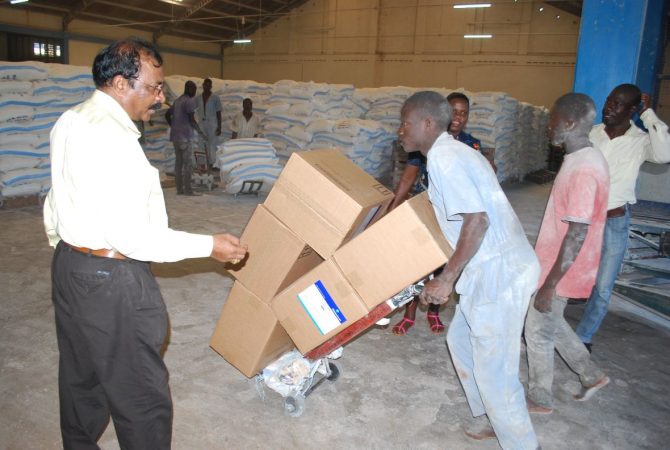 Mühlenchemie was founded in 1923 became of part of the Stern-Wywiol-Group in 1990. Today it is one of the world’s most renowned companies in the field of flour improvement.

According to government data, 19% of the 33 million Ugandans are under- or malnourished. The Uganda Nutrition Action Plan (UNAP) 2011-2016 cites the uncertain access of households to food as the main cause. In addition to this access problem, the diet is often unbalanced and does not cover all the important nutrients.

The government estimates that the country alone lost 310 million dollars annually in productivity due to the consequences of deficient nutrition. This equals 4.1% of the GDP.

The aim of the PPP-Project is to combat malnutrition of the Ugandan population through a nationwide fortification of flour with vitamins and nutrients. For this purpose, at least eight of the approximately 13 large mills of Uganda are put in a position, where they are able to ensure professional and continuous enrichment of flour with vital nutrients.

The whole population benefits from the PPP-Project, especially children and pregnant women who suffer most from malnutrition. The small extra charge for enriched flour – the current market price is increased by a maximum of 1% – enables poor people to provide themselves with sufficient nutrients.

The growing Ugandan market provides the company with additional expansion opportunities. The UNAP-Decree of the Government of 2011 creates conditions to expand deeper into the Ugandan market. Through the project, Ugandan mills are put in a position to implement the government’s plan and to use Muehlenchemie’s premix correctly and economically. The structures developed to educate and train employees in addition to the direct contact with mill operators assure the company constant sales for the full product range.